– Since 2014, India has repatriated 41 heritage objects back to India

–  MEA, ASI, CBI among others have also greatly contributed towards this endeavour

The Minister of Culture, Tourism and the Development of North-eastern Region (DoNER) G. Kishan Reddy in a written reply in the Rajya Sabha, provided the information that a total of 54 antiquities have been retrieved from foreign countries till date since 1976.

Giving more details later, G Kishan Reddy said “It is a matter of pride that we have been able to retrieve many of our stolen heritage objects from abroad”. The number of antiquities recovered in the last seven years is the highest ever, he revealed. Since 2014, India has repatriated 41 heritage objects back to India which is more than 75% of the total objects returned. 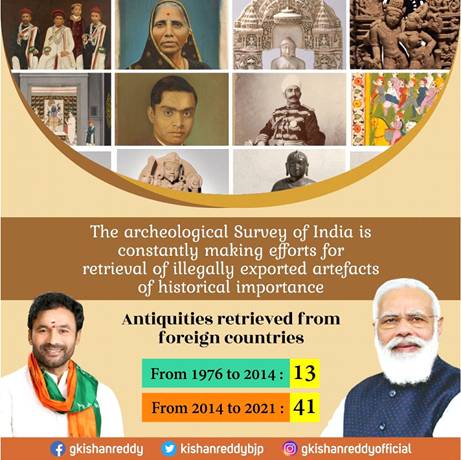 The Minister also credited Prime Minister,  Narendra Modi, whose relentless efforts led to the retrieval of these antiquities from abroad. “I believe that the recent success is because of our continuously improving cultural relations that was made possible due to the warm personal relations that our Prime Minister shares with various heads of states and hence their expeditious return was made possible”, he added.

Kishan Reddy lauded the tireless efforts of various government agencies like ASI, CBI among others in this endeavour. The Union Minister stated  “The preservation and protection of the Indian artefacts and cultural heritage are an integral component of India’s foreign policy. Hence bringing back and the returning of these historical objects is a process to restore India’s pride and an active step to appreciate and acknowledge the historical past of our country. We are working closely with the Ministry of External Affairs to expedite the process and the necessary paperwork required for the immediate return”, Reddy added.

PM’s address in the 80th Episode of ‘Mann Ki Baat’ on 29.08.2021 New Delhi: My dear countrymen, Namaskar. All of us know that today is the birth anniversary of Major Dhyanchand ji. And our country celebrates [ READ …]

PM’s Departure Statement ahead of his visit to USA

PM’s Departure Statement ahead of his visit to USA Delhi: I will be visiting USA from 22-25 September, 2021 at the invitation of His Excellency President Joe Biden of the United States of America During [ READ …]

A new Centrally Sponsored Scheme with a special focus on the North east region and the Andaman and Nicobar Islands A financial outlay of Rs.11,040 crore out of which Rs.8,844 crore is the share of [ READ …]